How NOT to shop at a Cretan farmers’ market

Our latest travel to Crete for my book tour in the spring was hands down the best trip we’ve had there since moving back to the States.  I like to describe it as being the perfect mix of work and play, old friends and new, adventure and rest.  I admit, I can’t seem to cut the cord that ties me to Crete.  After all, we moved from there five years ago in August and have returned to visit three times.  There’s something about this island that woos me back, including friends, the sea, the culture, and definitely the food.  Especially the fresh fare to be found at the laiki.

Like many European cities, a farmer’s market can be found most any day of the week in different locations around the city.  My personal favorite is the Thursday morning laiki in Hania.  On a hot summer day, the trees provide welcome shade and the breeze off the water is cool and serene – a contrast to the cacophony of noises  permeating the air between the canopied booths.

The products at the market mostly come from local farms and tradesmen who set up their displays early in the morning and sell their fresh wares at prices so low it’s hard to believe they make a profit.  For this reason, price bartering is not the norm.

Ted was fresh off the flight from the States when he accompanied us to the laiki.  We were excited to show him a piece of Cretan culture that was an important part of living on the island.  We walked down the long aisle between colorful and fragrant produce, cheeses, fish and spices.  A man selling feta reached out to us with a long knife as we passed him.  On the end of it was a chuck of feta.

A few minutes later we noticed Ted wasn’t with us.  Turning around, we saw him walking towards us, and as he approached he held up a large chuck of feta and remarked smuggly, “I bartered a good price for this. I told that Greek that I wanted a euro’s worth of feta and when he gave me a chuck, he tried to charge me five euros!”

I suspected at this point that there was a serious “lost in translation” moment, especially since Ted didn’t know a lick of Greek but was fluent in Spanish and defaulted to it frequently.

He continued to brag, “I told the guy I was only going to give him a euro because that was the deal.  I slammed the coin down on his counter and walked away.”

At this point, I was mortified but Ted was quite pleased with himself and was still laughing when the Greek cheese vendor came up behind him.  To everyone’s surprise, he grabbed the cheese out of Ted’s hand, gave him back his euro and walked away muttering his displeasure for the “ugly American tourist” not so quietly under his breath.  I didn’t understand exactly what he said in Greek but the look on his face said it all.  I muffled a laugh. Ted was speechless (and to his credit, a little embarrassed.)  He shrugged it off and headed on down the aisle to do more shopping, a lesson in bad behavior under his belt and hopefully, engrained in his brain.

Doing business Greek-style often includes deal-making, bartering, loud negotiations, and lots of gesturing.  But oddly, I’ve never seen this behavior at the laiki.  In fact, it’s rather the norm than the exception for the vendor to stuff a few extra peppers or peaches into your bag as he hands it to you. Maybe because it’s a neighborly event; one where food is the epitome of generosity for which the the Greeks are famous.

And one where you come away with gobs of freshness for a pittance of money. 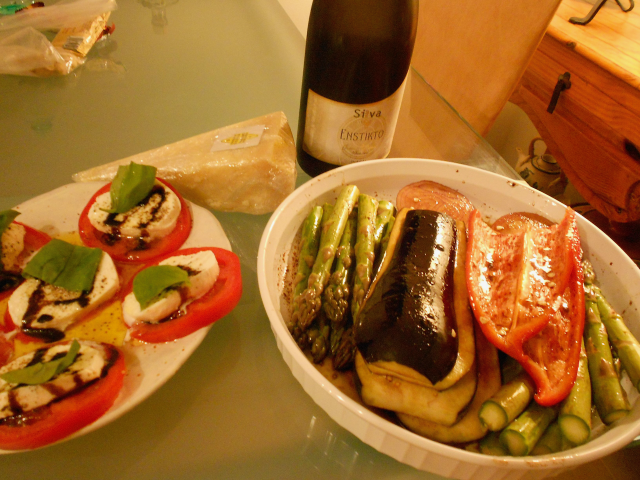